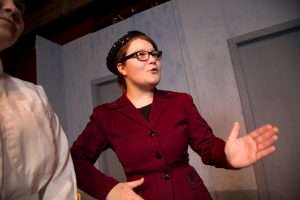 The Barton Community College Performing Arts Department will hold auditions for the 2019 Spring Musical, Rodgers + Hammerstein’s “Cinderella.” Auditions are open to everyone and will be held from 5-6:30 p.m. on December 8 and 9 in the Fine Arts Auditorium. The show will be presented March 6-8.

Barton Theatre Director Miller James said he is excited to cast the show.

“We are looking for performers of all ages and experience levels who possess enthusiasm, can collaborate, and exhibit commitment and dedication,” he said. “This show is full of fun and magic and we want people to be a part of it.”

All those who wish to audition should come on Dec. 8 prepared to move and dance and plan to stay until 6:30. They are encouraged to wear fitted clothing, dance shoes, socks or character shoes. There will then be an opportunity to sign up for a 10-minute singing and acting audition on Dec. 9. Those auditioning should be prepared to demonstrate their vocal range, sing the excerpts specific to their interest, read a cutting from the script for speaking roles and learn and perform a short movement sequence. Ages 9 and up are encouraged to audition. Younger performers will be considered on an individual basis. If you absolutely cannot attend but are still interested in auditioning, please contact James at [email protected] or (620) 792-9205.

Rodgers + Hammerstein’s Cinderella is the new Broadway adaptation of the classic musical. This contemporary take on the classic tale features Rodgers & Hammerstein's most beloved songs, including “In My Own Little Corner,” “Impossible/It's Possible” and “Ten Minutes Ago,” alongside a hilarious and romantic libretto by Tony Award nominee Douglas Carter Beane as well as some new characters, and surprising twists.